It’s a task that involves a complex network of road closures, managing millions of spectators that line the streets to greet the peloton, and ensuring that the print, broadcast and digital media can tell the story of the race to a global audience. Race organiser the Amaury Sports Organisation (ASO) believes the profile and the scale of the Tour makes it unique in world sport.

‘We have a lot of requirements’

The role of the media in the creation and the ongoing success of the Tour de France is significant. The race was originally founded as a way to sell more copies of L’Auto newspaper, with live radio coverage starting in the 1920s, followed by the advent of television and cinema newsreel highlights before the first world war.

Live broadcasts started in 1948 for selected stages, and now every single second of the race is transmitted around the world in high-definition quality, supported by official websites, applications, and social media accounts.

The Tour de France has the same challenges and fan expectations as other major sporting events but does not have the benefit of permanent infrastructure or even a static position. The Tour is constantly moving, a circumstance that has influenced how it approaches technology.

“The key thing is preparation,” Pascale Queirel, chief technology officer at the ASO, tells SportsPro at the final stage in Paris. “The complexity of the tour is that we are moving every single day and unlike other sporting events, our stadium is moving every day and can be hundreds of kilometres in size. This is why we work with specialist technical partners in every domain.”

France Televisions provides the broadcast feed for international broadcasters, while technology giant NTT delivers data and digital services. This year, the ASO even partnered with Waze to minimise the disruption caused by road closures.

A technical zone at the end of each race comprises dozens of trucks, each hosting international broadcasters, media representatives, race officials, and technical partners. The operation starts at about 4am and the final truck leaves as late as 11pm, when it will travel overnight to the next stage.

Underpinning everything is the network. Orange has worked with the ASO for 23 years, providing connectivity for the technical zones at the end of each stage.

“Sometimes the tour comes to a big city, a small city, or at the top of a mountain,” adds Queirel. “Everywhere we go, we are able to deploy the connections we need to support the broadcasters and the organisation. We have a lot of requirements.” 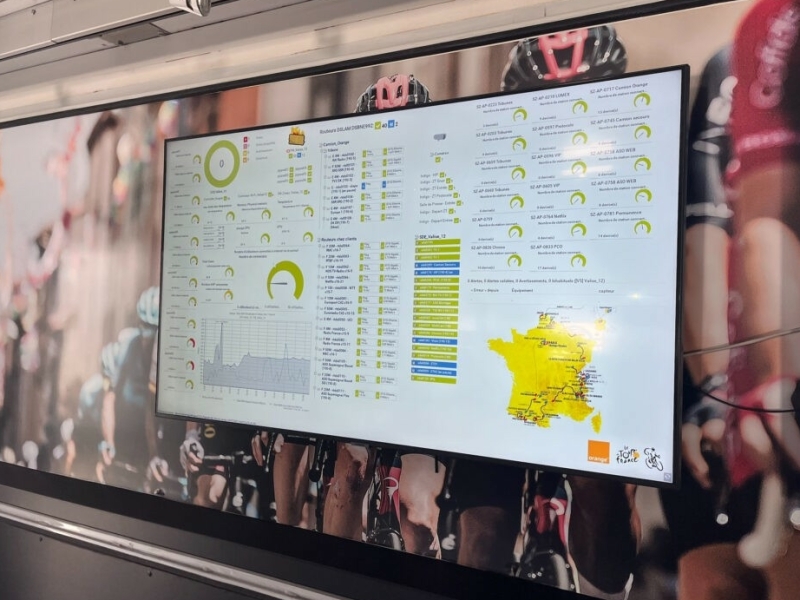 Orange monitors network health via a dashboard in its technical truck.

Fibre connectivity is crucial for the media. Although fans might line the streets in their millions, television coverage is the only way to see the race in its entirety. Live footage is captured via cameras on motorcycles and helicopters and transmitted via satellite to a cherry picker situated in the technical zone next to the producers, who provide pictures for international broadcasters.

This year, Netflix has also partnered with the ASO to create a Drive to Survive-style documentary on the world’s most famous cycling race.

Each morning, Orange connects each of its customers’ trucks to its fibre network and monitors the health and performance of each link via a dashboard in its own temporary home. For the final stage of the tour in Paris, Orange deploys 20 kilometres of cable, but no two days are the same – trucks will park wherever they want from one day to the next, meaning the network map is constantly changing.

It’s a huge operation comprising 50 experts and technicians at each stage, 15 tons of equipment, press room WiFi networks, 500 temporary telephone lines, and 1.4 million minutes of connections throughout the race.

This network also connects the finish line, intermediate sprint points, and the International Cycling Union (UCI) jury who might need to make a judgement or disciplinary decision based on video footage. Commentators are also connected, equipped with information about each stage and the route – including the trivia about châteaux that are frequently the subject of glamorous aerial views.

The challenge of an inconsistent environment is matched by discrepancies in coverage. While major cities will be covered by commercial fibre deployments, the Tour takes in rural villages and famous climbs in the Pyrenees and the Alps – areas where connectivity might be lacking.

Despite the importance of these connections, the ASO will never prioritise logistical considerations over sporting ones. Accordingly, Orange will build temporary mobile infrastructure where necessary, and connect start and arrival venues to fibre where it is lacking.

“When we learn the route of the race, we identify whether the smaller towns have fibre, we study the indoor coverage of 3G, 4G and 5G, and the outdoor coverage,” says Henri Terreaux, technical team manager at Orange. “We upgrade all of those cities. The authorities in the start and finish villages are happy because [of these upgrades].”

This year Orange has built eight permanent 4G and 5G masts as well as temporary masts along the route – most notably a tower at 2,400m above sea level in the Granon Pass. In some cases, the technical zone will be some distance away from the finish line due to logistical reasons. It’s impossible, for example, to get every single truck at the top of a mountain finish. Again, Orange connects these sites, ensuring the all-important pictures and post-race interviews can be transmitted.

In theory, the Tour should be the perfect candidate for 5G mobile networks. 5G offers vastly superior speeds and capacity to previous generations of mobile technology and network slicing means it’s possible to ringfence a certain part of the network with guaranteed performance – without the need for as many wires.

Nonetheless, Terraux says fixed connectivity remains key: “We don’t have 5G for the whole race because coverage is only in large or medium-sized cities and the broadcasters prefer fibre because it is more [reliable].”

From bike to cloud

NTT is another key technical partner, having worked with the ASO when the IT infrastructure and services company was still known as Dimension Data (it also sponsored a team of the same name). Over the past eight years, NTT has helped develop the Tour’s digital strategy and overhauled its data gathering capabilities, creating entirely new fan engagement propositions and simplifying many of the ASO’s organisational functions.

The challenge for NTT is to provide race organisers with reliable, highly capable infrastructure that can support mission critical applications but also provide the agility required for a hugely dynamic environment. On top of this, external facing applications must have the scalability to handle large numbers of users.

NTT deploys a form of ‘hybrid IT’ that combines on-premise equipment, cloud applications and platforms, and edge computing into a single converged infrastructure. Cloud eliminates the need to have as much kit in the technical zone, drastically enhances capabilities, and reduces the number of staff required on-site while enabling remote support. It’s more resilient and the IT team can manage the entire environment from a single dashboard.

Meanwhile, any equipment that does need to be used has to be able to deal with being transported 3,900 kilometres around France, sustain extreme temperatures and vibration. Edge computing processes information as close as possible to the point of collection, meaning it doesn’t need to be sent to a centralised cloud platform, which reduces latency.

Latency is critical when collecting data that has an expiry date. The ASO actually had the ability to record information such as bike speed and position for several years but lacked the capability to collect it in real time.

Now every bike has a device underneath the seat, complete with a GPS chip, radio, and battery. A reading is taken every second from every single rider and transmitted to the television helicopters, sent to the tech truck and then to the cloud for processing. The insights gathered from this data are combined with other sources of information such as race, timing, and environmental data to create insights for television graphics, the official mobile application, and social media channels.

This means fans at home can gain greater insight into the race and spectators at the roadside are given an estimated arrival time for the peloton, while a dedicated team creates data-driven insights for social media. On top of this, data is fed into machine learning algorithms to create predictions and power an official fantasy cycling game.

All of this deepens engagement, stimulates conversation, and helps more casual fans understand the intricacies and tactics of team cycling.

“The Tour de France is really the only race that non-cycling fans watch [each year] so we always pay attention to how we can better explain the tactics and how we can introduce the teams and the riders,” Peter Gray, senior vice president for sport at NTT’s advanced technology group, tells SportsPro. “A lot of the work we do is telling these stories.”

“This is even more important for the Tour de France Femmes because the women’s sport has not had the same level of exposure. Providing that digital equality across the men’s and women’s races is so important to us because it takes women’s cycling to another level. Probably our biggest focus this year has been taking all the great things we’ve implemented at the Tour de France and bringing them to this new race.

“We’ve had to retrain about all of our modelling based on the women’s peloton and the women’s racing. But it’s actually been a really interesting exercise and the performance of the models has been excellent. We have a pro cyclist who is currently out injured working with us, bringing her knowledge of women’s cycling and helping us understand what makes for an interesting story.”

This data also provides the foundation for what NTT and the Tour de France call the ‘world’s largest connected stadium’ – essentially a digital twin of the entire race. Digital twins are an accurate virtual representation of a physical space, allowing venue operators to simulate changes or scenarios in real time.

The technology has been used in industries like manufacturing to evaluate the impact of a change to a production line, as well as for other major sporting events like the Open Championship golf major and the upcoming Paris 2024 Olympic Games.

NTT’s digital twin takes all of this race data, combines it with other repositories such as fleet management systems, and overlays it on a 3D view of the race. It has complete visibility over riders and assets so it can make real-time decisions that would otherwise be impossible – at least with the same level of understanding. Organisers can also use the insights to plan future races, making the whole enterprise that much easier.

“The Tour de France is so dynamic, it’s moving all the time… and from an operations perspective, the ASO have never had all this information in a single place – it’s been in various spreadsheets or systems,” says Gray. “The setup changes every single day, so this is a really invaluable tool.”

The Tour de France has constantly reinvented itself for the century it has been in existence – not least with the reintroduction of a women’s race this year. Not only will NTT apply the same innovations as the men’s race, there is a possibility the women’s event could become a hotbed of experimentation in the future.

For the first time in either race, the Tour de France Femmes is making a team radio feed available to broadcasters, giving viewers even greater insight into the tactics of a cycling race and a glimpse at what happens behind the scenes.

“The Tour de France Femmes is actually a great opportunity to incubate and develop new solutions that wouldn’t be accepted in or maybe too difficult to do with the more-established men’s race,” says Gray. “It could become a much more innovative event.”